URGENT 911 Tech System ECTP Criminal Investigation Needed!
NYPD Coerced me to drop charges or go to jail with a hole in my retina Saturday arrest for Dr Fagelman's savagely violent lying receptionist Delita Hooks' running punch to my eye grabbing my hair trying to drag me down the hall by my hair damaging my neck not fired or arrested I agreed to false arrest Oct 16 immediate than Det John Vergona changed my false arrest date to Saturday oct. 20, 2012 4PM Internal Affairs let him and his supervisor retire! Turns out corrupt Det John Vergona of 01 Det Squad is facebook friends with NYPD PO Gene Schatz -- the first cop I reported to internal affairs for his illegal use of sirens and his car -- all on behalf of The Mercer Hotel! Schatz and Vergona are also facebook friends with Det Andy Dwyer -- Delita Hooks corrupt Detective as well as Det Tommy Moran and possible other NYPD detectives involved in a series of crimes from Dr Andrew Fagelman's to the First Precinct all protected by corrupt Internal Affairs.

I don't know if Andre Balazs is still running the Mercer but this is a guy you don't want to date, marry and page 6 of The New York Post has never published the dirt on this guy.  Lucky for him.

Andre Balazs (party time? vs courageous soldiers that served our country) or whom ever is in charge at The Mercer Hotel -- did you serve in the military and go to war front line like many of the people you call the 1st Precinct to come and  harass because you want them swept off the street, Prince Street?


Also lucky is there never is a drug sniffing dog at the front doors of The Mercer Hotel.  I wonder if any thousand dollar sex workers or maybe I am pricing them a little low, make calls to The Mercer Hotel?

I do not know but I do know that fancy cars and limos idle out there 24 hours a day 7 days a week, year round  and NEVER, EVER get ticketed.

Some horrible creature posing as a human being---MICHAEL RAWSON from management at The Mercer Hotel insists on using the NYPD from 1st Precinct as a tool to harass Viet Nam Vets.

It is 99 degrees and that means even hotter on the side walks.  You think that hotel would send out water to these Vets rather than harass them.

I photographed and praised the 1st Precinct when they did the right thing and refused to ticket the Vets when the creepy owner/manager of The Mercer Hotel called the NYPD on them.


Now I have to show you photos and tell you Capt. Winski got his guys to whip out their tape measures and using a ruler gave our two vets tickets and because of "inches".  The Vets will go to court and fight the tickets.  I hope they get these tickets dismissed!

Has the Capt., Commissioner Kelly, king Mike who flushed democracy down the toilet and thinks he is above the law which is a good thing because the Haggerty scandal and Mike paying out of his personal checking account instead of the campaign account is just the beginning of Bloomberg scandals that will FINALLY come out  -- BUT MY QUESTION -- HAVE ALL THESE GUYS FORGOTTEN THE VETS THAT STOPPED A BOMB FROM GOING OFF MID-TOWN?

Guess what?  Capt. Winski comes from Mid-Town and is now the commander of the 1st Precinct.

I have been called a cop-lover.  If I can side with the NYPD and support them, I do.  I have asked for a raise for The NYPD and FDNY  in a letter in The New York Times.    Right now if you go to The New York eminent domain Times, my letter asking for a raise for the NYPD and the FDNY has been mysteriously removed with more than half of my 9 letters published pre-Bill Keller.     I have contacted the paper and demanded they restore all my letters.

I have asked that the NYPD along with other  the FDNY, PAPD, EMS  be honored at the WTC memorial always in The Wall Street Journal with a powerful letter called "Betrayal at Ground Zero".

Witnessing Vets being harassed today was so wrong and Capt. Winski has warned the Vets that he will be back Saturday to harass the Vets so more.  Have your cameras and video cameras ready.

I called and left my name and number with a respectful NYPD officer at the 1st Precinct for Capt. Winski.   I made it clear this blog posting is going to Commish Kelly who is a Viet Nam Vet.  I have heard on the street that he doesn't approve of the tables and even tried to discourage his wife from buying jewelry at one of these charming tables way back when.  I asked Capt. Winski to call me with the time Saturday he will be returning so I can film him and post on YouTube.


I do fear the Commish caters to the rich like his boss but I won't stop writing him and speaking up for the Vets.  Not every Viet Nam Vet came home and ends up Commish of the NYPD.   I know one that died downtown a hero only to be made invisible along with all the heroes that rushed down to the site 9-11, many were highly decorated serving in the military and within their departments  and died giving their all.  The State of NY and the City act like our heroes died in a foreign country.  If I was mayor and I am not running for office, there would be a sign down there from Sept. 12, 2001 on thanking and honoring the largest loss of rescue workers in our City, State and Nation's history.


My Dad served in World War 2 and he became a Prof. of Economics teaching for 53 years but not every Vet can do that and where does a rich arrogant hotel like The Mercer get off calling the NYPD when the Mercer Hotel is far from a saintly operation -- uh, huh, I am talking about the idling cars.

Can we get some drug sniffing dogs over to front doors of The Mercer Hotel?  Can we get those machines that you wave like a wand that check for guns like they have in NYC schools over to The Mercer.  I am sure that if anyone is caring a gun there they have a license -- no worries -- and those high priced sex workers -- the kind that Elliot Spitzer uses and many, many others here in NYC use -- I am sure they never visit The Mercer Hotel.


I am sure if there were any laws being broken except the idling cars that never, ever get tickets,  the 1st Precinct would be on it. 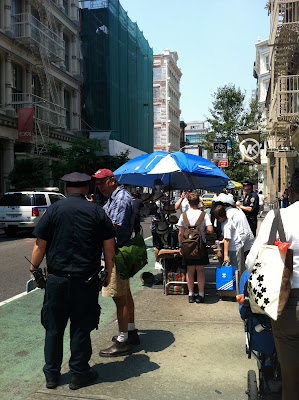 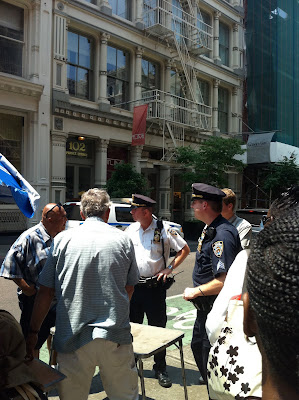 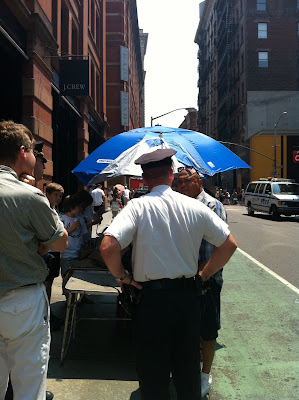 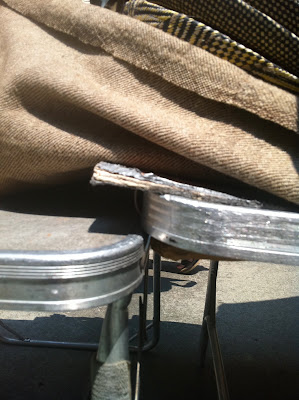 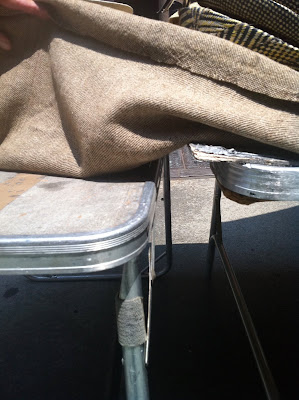 Capt. Winski ticketed these guys because of inches and  as soldiers maybe they survived by inches only to get ticketed here in NYC for "inches".  Yes, a measuring tape and 2 inches proved they had broken the law.   Here is one example.

I have had breakfast  at The Mercer in the past  but I will never ever eat there again.   Any rich people and movie stars that want to stay at The Mercer -- unless you support the harassment of Vets and people that are trying to earn a living and don't get paid obscene amounts of money ---I suggest staying else where!

Here I am praising the 1st Precinct to the Heavens and to Commish Kelly.

http://suzannahbtroy.blogspot.com/2010/05/bomb-suspect-picked-from-terrorism-to.html
Posted by Suzannah B. Troy artist at 5:50 PM No comments:

Suzannah B. Troy artist
Passionate letters published in The Financial Times re: Lucien Freud, my art and women's issues, The Wall St. Journal"Betrayal at Ground Zero", The Chief, The New York Times (9),Crains "NYU's Logo should be a dorm with a dollar", The New York Sun, The New York Post, The New York Daily News, Metro, AMNY, The Village Voice "Carbon Copy" letter of the week, Newsday, Jerusalem Post, my blog mentioned New York Mag Intelligencer neighborhood watch. Got speed bumps for Anna Silver School & doors for women's bathroom Tompkins. Donated my white blood cells twice to help a little girl fight Non-Hodgkins & man w/Lymphoma. Two hour process & you can only do it 12 x in your life. Too worn out to donate now. Way back Liz Smith mentioned me & my favorite zen quote "Live each moment as if your hair is on fire." which means live in the moment like it is your last aka live life passionately! I am really proud to say I have run 2 New York City Marathons!!! Also to have done volunteer work with pre-school handicap children at Rusk. NYTimes My YouTube work 1) Giuseppi Logan’s Second Chance 2)Mysterious Mr. Rechnitz